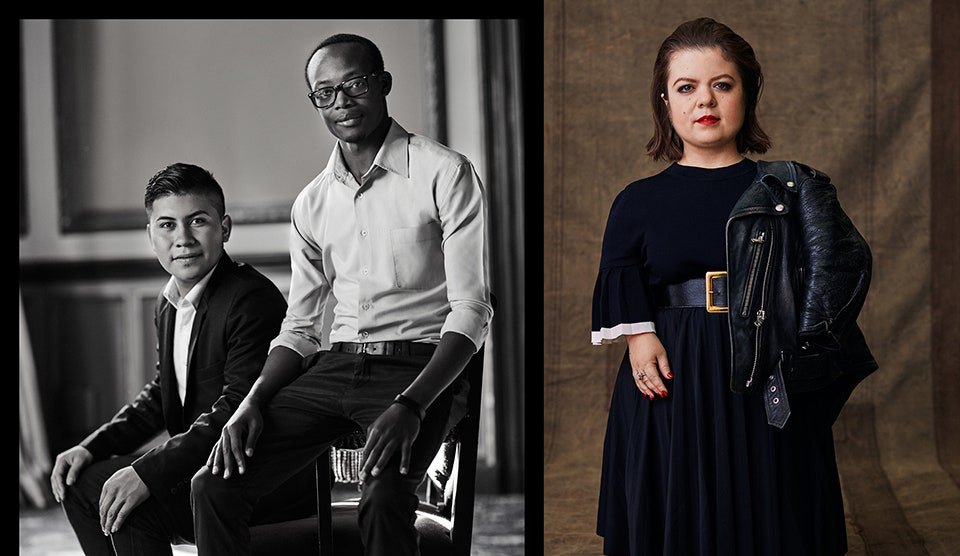 Vanity Fair launches its inaugural Global Goals List with One Young World, honouring those leading the charge to achieve the 17 goals outlined by the United Nations’ 2030 Agenda for Sustainable Development.

We live in a bewildering era saturated with apocalyptic headlines, partisan schisms and calcifying division. Amid the turmoil, it’s easy to forget that change—breeding uncertainty—also catalyses innovation, excellence and the reconfiguration of expectations. These are the values championed by One Young World, an itinerant summit that gathers young leaders from across the globe for four transformative days of speeches, panels and workshops driven by figureheads spanning Meghan Markle to Justin Trudeau and the late Kofi Annan.

Spotlighting the luminaries working to build a better, more collaborative world that champions inclusivity, education and the environment, the overarching objective of the list is this: to make the Global Goals more accessible, and more aspirational, and inspire a new generation of game-changers to realise that their voices—however small they might seem against the swell of opposition—can spark change.

The figureheads Vanity Fair and One Young World have selected may be separated by age, nationality and area of expertise, but they are united in the commitment to achieve the U.N.’s blueprint for peace and prosperity. And in the fact that they were all photographed by Dutch photographer Alek in The Hague, at One Young World’s 2018 summit.

Muhammad Yunus makes the list for his push to eliminate poverty. Banker, economist and founder of Grameen Bank, his pioneering microfinance models have empowered low-income entrepreneurs to launch locally rooted businesses. In 2006, Yunus and the Grameen Bank were jointly awarded the Nobel Peace Prize “for their efforts through microcredit to create economic and social development from below”.

Innovator, thinker and One Young World Ambassador from Kenya, Brian Bosire is the recipient of multiple awards, including the Five Young Africans Changing the World in 2017. His primary focus is taking the possibilities offered by technology and applying them to some of the challenges faced by Africa. He is the founder of UjuziKilimo, which brings precision farming tools to small-hold farmers so they can produce more food, and thus help combat the hunger challenging millions. In addition, he also founded Electrosoft Ltd, which aims to improve productivity in the energy, water and sanitation sectors.

A Haiti-born One Young World Ambassador, Olivier Noel is passionate about healthcare disparity, genetic research and precision medicine. Founder of genetics startup DNAsimple, which aims to connect researchers to patients, Noel’s goal is to increase the diversity of the pool of research participants so cures can be found for diseases based on one’s specific DNA variants or markers.

Former prime minister and chancellor of the Exchequer Gordon Brown was appointed United Nations Special Envoy for Global Education by then-U.N. Secretary General, Ban Ki Moon. In this role, he has pledged to tackle what he describes as the “civil rights struggle of our time”—the patchy distribution of education that prevents millions of children from accessing the opportunities they deserve. In May 2018, he launched a £7.4 billion project aimed at broadening the reach of education in some of the world’s most deprived countries by way of a scheme that would see donor countries acting as guarantors on low-cost lending. The objective, he said, is to have the first generation in history in which all young people will have the opportunity to go to school.

After Amanda Nguyen was raped, she learnt that state law dictated that her rape kit (containing evidence that could prosecute her attacker) could be destroyed after six months. This flaw in the criminal justice system prompted her to found the non-profit organization Rise, which is dedicated to supporting the rights of sexual assault survivors. In 2016, Rise spearheaded the passage of the Sexual Assault Survivors’ Bill of Rights through the U.S. Congress, becoming the 21st bill in modern U.S. history to pass unanimously through Congress. In 2018, Nguyen was nominated for the Nobel Peace Prize.

After graduating, Daroath Phav joined WaterSHED, a non-profit organisation of which he is now executive director. Building on the World Association of Non-Goverment Organisation’s mission to improve standards of sanitation and hygiene, he helped improve access to toilets in rural Cambodia from 25 per cent to 56 per cent over six years, and generated more than £4.5 million for local businesses in the process.

Touring abroad, musician Akon repeatedly found that some countries didn’t have the infrastructure to light the types of large-scale gigs he played in America. So, in 2014, he joined forces with Senegalese-American__Thione Niang__ and Malian entrepreneur__Samba Bathily__to launch Akon Lighting Africa, which delivers renewable energy by way of trained African experts instead of overseas charity. At the heart of the initiative is the drive to create jobs and construct a self-sustaining infrastructure to support emerging economies.

In 2013, Hollywood actress Rosario Dawson partnered with Abrima Erwiah, former global marketing and communications officer at Bottega Veneta, to launch Studio One Eighty Nine. Based in Ghana, the label supports artisan-produced African clothing, with the objective of supporting job creation and training communities in traditional African craft techniques, such as hand batik and kente weaving. In 2018, the brand was awarded the Council of Fashion Designers of America Lexus Fashion Award for its outstanding contribution to sustainable fashion. “It feels like a good time for brands like this one,” Erwiah told Women’s Wear Daily. “The world is ready. It’s about understanding the supply chain, the people involved. We stand behind a lot of social causes also, stopping violence against women and rape, education initiatives, support of the development of Africa and the diaspora.”

Twitter founder Biz Stone has been honoured with the International Center for Journalists Innovation Award and was also named one of the 100 Most Influential People in the World. Although the reputation of technology companies is currently under significant pressure, Stone remains a strong advocate of social media, believing it to be a fundamental tool in the promotion of free speech.

Sinéad Burke is a teacher, writer and advocate for disability and design. Co-founder of the Inclusive Fashion and Design Collective (IFDC), which works to encourage brands to consider individuals with disabilities in their work, she stresses the importance of hearing from a diverse range of voices. “I have achondroplasia, the most common form of dwarfism,” she wrote in a recent Vogue column. “Our biases and assumptions widen our differences, and—of course—culture and society often reinforce a particular form of ‘normal’. But if I’ve learned anything in my life so far it’s that no one is ‘normal’. Life is complex, challenging and full of difference.”

The founding member of the Laikipia Peace Caravan, and the youngest Kenyan woman to win the presidential Order of the Grand Warrior, Naisula Lesuuda’s eponymous foundation advocates for the education of girls and the eradication of female genital mutilation and child marriage.

Paul Polman—who is chairing the One Young World Advisory Board—believes that running a business sustainably is fundamental to promoting responsible business practices and ensuring long-term growth. The former CEO of Unilever, he oversaw the behemoth’s transition into becoming a global pioneer for sustainable business models by introducing the Sustainable Living Plan, which outlined the company’s sustainability objectives for the next decade. The overall idea was to grow the company while simultaneously decreasing its overall environmental footprint.

Former U.N. Climate Chief Christiana Figueres has been instrumental in crafting climate change talks since 1995. In 2015, she led the historic Paris Agreement, thus spearheading perhaps the most determined, comprehensive plan to tackle climate change in history.

Bollywood actress Jacqueline Fernandez was crowned Miss Universe Sri Lanka in 2006. A humanitarian advocate, she was awarded the Humanitarian of the Year Award at the 2017 Asian Voice Charity Awards for her work with Habitat for Humanity. A key voice for the protection of marine life in the Indian Ocean, here she is honoured for her work on Goal 14: life below water.

Neyder Culchac is a young Colombian farmer, who has advocated to transform farms once used in the production of illegal crops to farms that grow safe, alternative produce. As a result, Culchac strives to eradicate the violence that has emerged through the production of illicit crops such as coca.

Theodor Meron has worked as a judge in tribunals in Yugoslavia and Rwanda, and has been a judge and the president of the International Residual Mechanism for Criminal Tribunals since it was established in 2012. In recognition of his work, he has been the recipient of multiple awards, such as the Hudson Medal (American Society of International Law) and the Haskins Prize (American Council of Learned Societies) as well as Officer of the French Legion of Honour.

17. Partnerships for the Goals: Jayathma Wickramanayake

Wickramanayake was appointed as the U.N. Secretary-General’s Envoy on Youth in 2017. In this role, she works to expand the U.N.’s youth engagement and advocacy efforts across all four pillars of work (sustainable development, human rights, peace and security, and humanitarian action) and also serves as a representative and advisor to the Secretary-General. Wickramanayake has also worked extensively on youth development and participation, and has played a key role in transforming the youth development sector in her home country of Sri Lanka. Previously, she has also advocated for global youth development on an international level, including being the first ever Sri Lankan Youth Delegate to the United Nations.